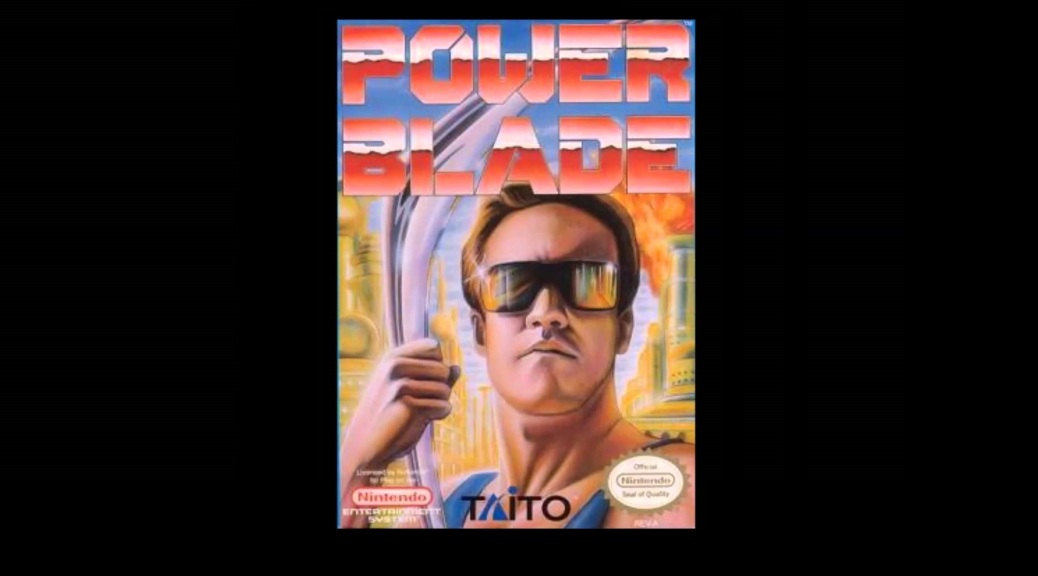 Somewhat a hidden gem on the NES, I can say for sure that Power Blade is the motherfucking tits! But I am going to talk about it objectively and point out things that I found to be negative things. Without further ado lets get into this shit.

Power Blade is a 1-player side scrolling action game set in the future of 2191. The human race has entrusted the complete control of it’s society to an all powerful Master Computer. When the computer malfunctions and turns on humanity, it is up to Nova, a tank top wearing, Arnold Schwarzenegger lookalike who is armed with the best weapon imaginable to deal with the crazed murder robots with, yes you guessed it……a boomerang. In order to restore order to humanity, Nova must clear six sectors and destroy the Master Computer. Each sector has a friendly agent hiding in it that Nova has to find in order to proceed to the boss of the sector, so the stages are non-linear and encourage exploring.

The character Nova can fire a boomerang in 8 directions around him. His boomerangs are upgradable, as is the range of the boomerangs and the frequency of throws. These upgrades are collected via enemy pickups.

Each time Nova gets killed the power, range and frequency of his boomerang get downgraded one level and the player must regain his lost power. There is a game-changing upgrade that must be mentioned in this game and that is the power suit. The power suit can be picked up in various places in the game but it is not a enemy pickup and it does not re-spawn. Once Nova is in the suit he can take 3 hits before he loses the suit. However, this fucking suit is amazingly imbalanced and you can laugh your way through this game if you can manage to keep the suit on for long periods of time. Nova’s boomerangs increase in size and are able to go through walls and pillars which is very helpful in many instances.

In the scenario that this screenshot is taken, Nova can easily fire through the pillars from below without being in any danger.

Power Blade has a difficulty setting. The difference between the normal and difficult setting is that in difficult mode you have less time to complete the stages and when you are hurt you are knocked backwards and that can have disastrous consequences in many situations. I had played this game before as a child and was surprised to find out how much I remembered about the game and how much my muscle memory got me through many situations. One thing that I found out about the game is that because of the factors that I mentioned above, it is very easy to snowball your way to victory. What I mean by that is that if you never die and you manage to hold on to the power suit then most of the bosses are pushovers. However the flip side to this is that if you die, you run the risk of the complete opposite happening. For example in sector 2 I was on my way to fight the stage boss and was cocked and ready in a full powered power suit but I missed a difficult jump and died and as a result lost the suit and all my skills went down one level. I kept on going and went to fight the stage boss only to have my ass handed to me because in order to defeat this particular boss you need to have max range.

After getting annoyed I started the level all over again and fought the boss with the power suit on with max range and didn’t even feel threatened by him.

Well that about does it with the gameplay, lets get into the good and the bad.

I really like the mechanics of this game. I like the way Nova moves and I like how much control you have of Nova while jumping. It is kind of similar to Mega Man. I often feel how much control the player has of the movement of the character while in the air is a good measure of how good the physics is. Too little control can be annoying while too much control can be absolutely infuriating. Power Blade has a perfect balance of this. I also like the physics of Nova’s boomerang, you can manipulate the direction of the boomerang by moving around while it’s heading back towards you. It’s little things like this that make this game great.

One thing that I really love about this game is the music. Take a listen to this shit:

The music of this game is fun, adventurous and dramatic all at once. The feeling that I get when I’m listening to the music is “I’m outgunned and outnumbered but I’m a fucking badass and you motherfuckers are going down”. The visuals are quite good, the environment and the look of the enemies is very detailed.

This game is short. Once you know which way to go the levels are not very long. They make the time it takes to complete the levels longer by having you get an ID card from your buddies and thereby repeating parts of the level. As I said before this game can be very easy, almost too easy if you choose the order of sectors correctly and manage to keep the power suit on for long periods of time. This can be considered a flaw.