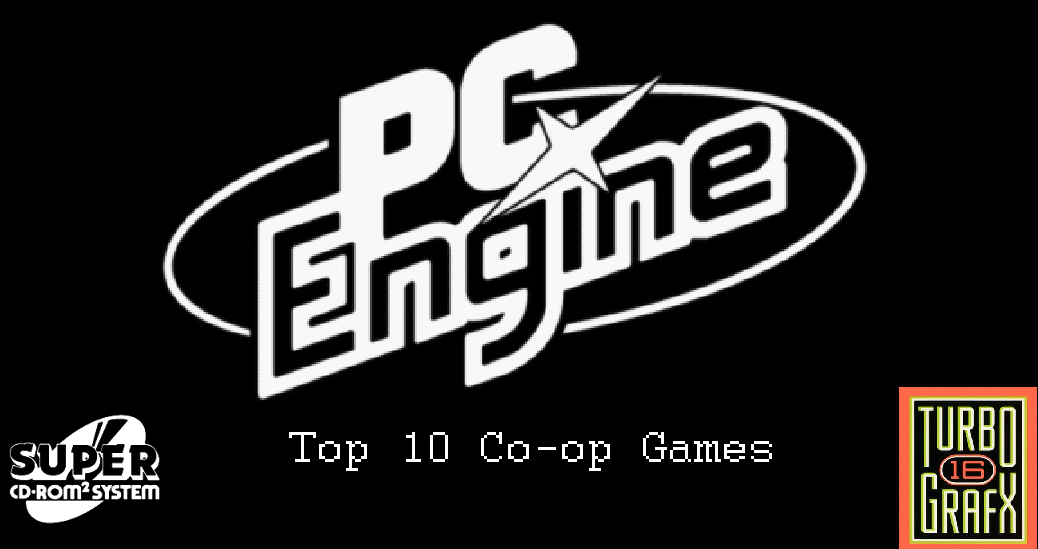 The Turbografx16 is a fanastic system but it might not be known for great 2 player co-op games but there are a actually a lot great games that come to mind if you add the Japanese library in the mix.
Because of this the Japanese only games have the obvious drawback of being in Japanese but in these cases it should not ruin your experience, but maybe just hinder it slightly…
This is the result of some intense Turbografx/PC Engine sessions we have been taking in the last months. It is made with pure love and with thorough playing of almost all co-op titles on the system
With that being said let’s just jump straight into it!

The system is of course very well known for being absolutely packed with shooters or shoot ’em up games (shmups) and a lot of them have a co-op feature. Instead of picking one game from the lot I decided to feature a handful of games that I feel deserve to be recognized. These games are:

All of these are pretty solid games if you just cannot get enough of co-operative shooters. 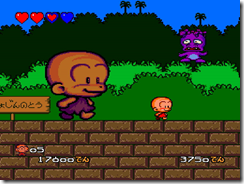 For the platforming fans the Bonk series decided to make their last hurrah with a 2 player co-op feature. The game itself is a pretty solid platformer but in co-op mode some of the platforming can be made easier. Other times the lesser skilled player might drag the other player down with him and you will not be able to advance in the stage. This can be said about many of the shmups too but it just feels more frustrating and somewhat clumsy when it happens in Bonk 3.
If you are a fan of platformers such as Mario, Sonic and Bonk then try this one out. If not maybe you should maybe scroll down and look for the better co-op games on the system.
If you like this one: Chip and Dale on the NES, other single player Bonk games

Mystic Formula is a pretty fun overhead shooting game with gameplay similar to games such as Jackal, Ikari Warriors or Shock Troopers. What makes Mystic Formula special however is not its gameplay but the fact that the game plays out like an Anime OVA with all its cutscenes and high end voice actors (the main character here is voiced by the same guy that does Franky on One Piece). Above I say that you require no Japanese skills to play but that only refers to the gameplay which is really simple but still pretty fun. If you want to get into the story you can look it up but you’ll get the gist of it by just looking at the pictures.
Mystic Formula has a nice atmosphere, fighter robots,  some sexy ladies and sassy guys in an otherwise pretty easy and average overhead run and gun/shooting game. Still worth a play.

Yes, this is what Nintendo World Cup was before they changed it for the western market. Not a world cup but a Japanese high school hot blooded soccer game. The gameplay is essentially the same but with some changes. You can still do super shots and kill your opponents with heinous tackles but the teams you play change with every match and sometimes the home team has special terrain like rocks or an icy soccer field like in the multiplayer feature of Nintendo World Cup.
The tactics you choose at the beginning of every match are in Japanese but they are not really difficult to figure out. This is essentially the World Cup NES game with enhanced graphics and sound and you will love it.
If you like this one: The NES version, the dodgeball game

The thing about both Rainbow Island games and the very rare Bubble Bobble 2 for the NES is that neither of them are co-op or simultaneous 2 player which just doesn’t cut it here.
Parasol Stars finally delivered a great co-op comeback on the PC Engine/Turbografx that features Bub and Bob now back as human boys armed with magic parasols instead of their trademark bubbles. An NES version was also released but that port sadly lacks the co-op option.
The gameplay is similar in nature to the other games. It has good, colorful graphics and cheerful music that anyone can enjoy.
If you like this one: Bubble Bobble for the NES and Master System

Dungeon Explorer is a pretty special game that allows for up to 5 players to play at the same time. It has often been called a Gauntlet clone but this is only partly true. I can see why people would think that given that the dungeons look similar, you can choose from multiple classes, enemies have spawn points you can destroy and the fighting mechanics are very similar. However, Dungeon Explorer boasts a bigger rpg experience since it has a story, proper music, proper bosses and a proper ending.
I guess Dungeon Explorer could be called the Japanese take on Gauntlet, but rest assured this game is a lot better than all Gauntlet games you have played
If you like this one: Try Dungeon Explorer 2

Horror Story is a fantastic arcade style, co-op run and gun game developed by Toaplan (Batsugun, Zero Wing). The game is  clearly inspired by Ghost busters in many ways but here we get the Japanese take on ghost busting as most of the enemies in the early stages are spirits from Japanese folklore. After that you ghost bust in a Wild West setting and a medieval setting.
Horror Story plays a lot like Contra games, you have to stay on your toes, shoot incoming enemies and do some platforming but it has a few features that really make the game unique. The characters can double jump and you can kill enemies by jumping on them. These are key elements that make Horror Story a completely unique game even though it can easily be compared to Contra. At first I was a bit skeptical about the game because you can only shoot forward and backwards but the stages and level design are developed around that and overall the game is a really fun run and gun co-op option that is plenty challenging also.
If you like this one: Contra games

The PC Engine really lacked side scrolling beat ’em ups and Double Dragon II might be the only half decent game on the system in that genre. Being a CD game, this port takes advantage of all that CD space and features a very well enhanced OST as well as graphics that do well to imitate the originals’ arcade graphics. What makes this game a bit weird is that it is a port of a port.
Double Dragon II: The Revenge for the NES was a port of the original arcade game, and this Turbografx/PC Engine game is a port of that NES game but with enhanced music, graphics and cool animated cutscenes. It does not affect the game in a negative way at all, I just thought it’s special.
I really recommend this one, the definite version of the game (for consoles at least)
If you like this one: Double Dragon for the Sega Master System. That game included the co-op feature that was missing in the NES port. Also recommended. 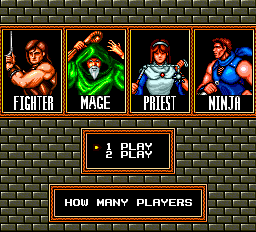 Cadash is an arcade port of the action rpg adventure game by Taito and it manages to grab the nr.2 spot on out list.
Cadash might seem a bit overwhelming at first but you just have to grind a bit and dedicate yourself to finishing the game no matter what. It is fun, especially with a friend so you will not regret it.
Cadash has great hack and slash gameplay tied with dungeon exploring and fun rpg elements. In addition, Cadash’s good looking graphics, fun music and overall good presentation makes Cadash an excellent choice for a co-op experience.The game is also available on the Mega Drive/Genesis but that version only has the fighter and mage as playable characters which just automatically disqualifies that version from the Turbografx vs. Sega version comparison.
If you like this one: King of Dragons maybe

1. Sapphire (Arcade CD in Japanese but requires no Japanese skill)

Sapphire is a pretty exhilarating co-op shoot’ em up experience. It was released in the final moments of the PC Engine in 1995 and makes use of extended RAM provided by the Arcade Card accessory. The gameplay is is nothing new but very well polished and fluid. Sapphire is a vertical shooter with 3 types of shots and power ups for one button and a limited number of bombs for the other, simple but clean.
The presentation is stellar,  the anime girl space cop thing works for me and the futuristic style atmosphere looks great also because the graphics are great and perhaps the best the PC Engine/Turbografx ever saw. To top it off the music is amazing CD quality epicness. Epic riffs and amazing guitar solos that will end up on your mp3 player. All that, robust difficulty settings and a co-op option makes Sapphire a game you will come back to and replay often.
If you like this one: The games in the 10th spot, Soldier Blade

Let us know what you think with comments or take part in the readers’ poll below.
Also make sure you check out our other top co-op lists and the  Top 10 Turbografx/PC Engine list. 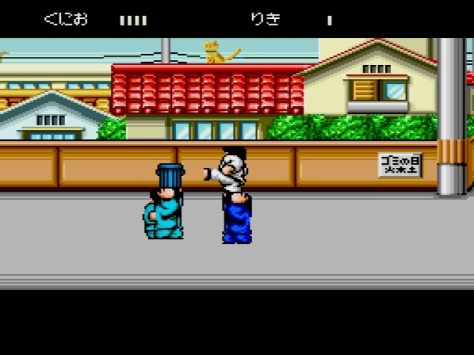 This is a port by Naxat Soft of the critically acclaimed River City Ransom by Technos that you probably know of on the NES. This port includes enhanced graphics and sound which is great, you can save your game which is awesome but all the dialogue, menus and items in the stores are in Japanese so I include this game only as an honorable mention.
This beat ’em up rpg is just so incredibly fun to play and the original NES game even got our 2nd place on the Top 10 NES co-op list and 9th place on the top NES games of all time.
The premise of this game and everything you do in it is just so fantastic. Beat up some no good punks who cry out “mamaaa!!” or “I’m history, dude!” and grab a bite of sushi afterwards to boost your stats or buy martial arts books to gain new moves but again you might not be able to enjoy that to the fullest because this port is in Japanese only.
Going through this one with a pal is so much fun and it makes you want to play it over and over again.
If you like this one: The NES version, the dodgeball game

Other honorable mentions could include: Operation Wolf, Pop ‘n’ Magic and Chiki Chiki boys. All OK games in their own right, especially Operation Wolf if you like gallery shooters.