Ys book 1 & 2 was ported to the Turbografx CD in 1989 and was received very well by most, even as a masterpiece by some. Because of Ys 1 & 2 being regarded that highly, people were a bit disappointed with the sequel. Ys III: Wanderers From Ys which departed from the first game in similar ways Adventure of Link departed from the 1st Original Legend of Zelda game. Even though Ys III has a phenomenal soundtrack the rest of the game failed to live up to its predecessor and has since often been called the “black sheep” of the series.
People were livid when they saw that Ys IV: Dawn of Ys was going to go back to the originals’ roots (Much like “A Link to the Past” did) and were starting to get hyped only to find out that the game would not be released outside of Japan. This was because of the Turbografx16 and its CD peripheral not doing very well in the western markets and were close to discontinuing the system.
Ys IV and the PC Engine did great in Japan though, so the game was released with critical acclaim. Many years later a fan dub/translation was done so us westerners could finally enjoy the game.
I speak fluent Japanese so i played the game like 50% in Japanese and 50% in English just for comparison. Read and see how I felt about Ys IV!

If you have not played the earlier games or if you do not know anything about Ys you really should be reading my reviews on the first two releases on the TurboCD before this one so here are link to those reviews:

The setting for Ys IV is that the protagonist from all the Ys games Adol and his pal Dogi come back to Esteria and Ys after having left on some adventures a few years ago. There they hear from Sara the fortune teller (who I believed died in Ys 1 but I guess she was just in hiding) that there are some ill omens and bad rumors coming from a kingdom in the west by the name of Celceta.
Adol takes off leaving both Dogi and the cute girl from Ys 2 without saying anything to go on his next adventure. There he takes on a bad empire and the Clan of Darkness who have been causing trouble in the land. That all winds up in a story about an ancient kingdom, an ancient angel race, a demon mask and all this is somehow related to the story of ancient Ys from the first game. The storyline is again a mystery about a lost forgotten kingdom and past glory which is something that I resonate with rather strongly.  Great stuff, and even though the story in Ys IV kind of coasts on the great story of Ys 1 & 2… By itself the story of Ys IV is awesome nonetheless.

Now I am not about to bore you with the details of the core action-adventure rpg gameplay of the game since it is about the same as in the first game. If you do not know anything about it I recommend reading my Ys Book 1 & 2 review on this site since you should be playing that game first anyway.
Ys IV: Dawn of Ys has the same core bump system gameplay as Ys Book 1 & 2 but with a few improvements, the biggest one probably being that now you can move in 8 directions instead of just 4. You get the magic spells again you had in the first game but now you get 2 types of projectiles which adds a bit of variety to the game. Other then that the fields, forests and dungeons’ level design gets better and you will not get as lost or need to backtrack as much as you had to in Book 1 & 2 where you might need a guide if you don’t want to waste too much time. Ys IV: Dawn of Ys is a more fluid and fun game because of this so you could say that this game has the most polished gameplay of the trilogy.

The games’ story is enriched and you always have a clear goal and a place to go so there are no boring parts in the game like with many rpgs where they start to feel extended and padded for extra playing hours. Ys IV is exciting all the way through even though you might find yourself having to grind 1 or 2 levels for a few minutes at a time if you feel very weak. This is not much of a problem though, especially when compared to other rpgs of this generation. In fact it is sort of amazing since without padding Ys IV is a very long game!
The Ys series continues their tradition of having amazing, engaging boss fight that are difficult, clever and satisfying. Most of the bosses look amazing, are meaningful to the story and make you break a sweat. Great stuff.

I know you know by now that the game looks amazing. Of course the CD format opens the possibility of everything you see here plus the voice overs but the in-game graphics also look very good and are a slight upgrade from the original title. 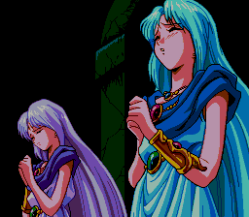 Remember these? I do…

The music team in charge of Ys just continue to throw out amazing tunes like an epicness factory designed for greatness. The music in Ys IV is top notch and like with the earlier games, Ys IV manages to be in a class together with the best video game soundtracks of all time. It is just unbelievable how one track after another can be so amazing, especially since this is their 4th game in the series and it doesn’t look like they are out of ideas at all. Mindbogglingly great stuff…
Here below is the boss theme as an example, it really sounds like something the Black Mages(FF cover band) would have done…but this is from the original game…. from fucking 1993:

All in all, Ys IV: The Dawn of Ys brings the series back to greatness after a small stumble with Ys III. The gameplay is still great, bosses are amazing and it is a long, story enriched experience that keeps being interesting through the whole game.
Like to be expected with Ys, the presentation is absolutely amazing. The graphics, animations, portraits and music are all triple A grade stuff. You will be blown away and if you were playing this in 1993 your face would have melted off.
The English fan dub and translation is done very well and keeps up with the atmosphere and the quality of the original Japanese version. Just google it and you will find a way to patch your game.

The SNES also got a version of this game called Ys IV: The Mask of the Sun and but the games differ in presentation and story. The PC Engine/Turbografx version is definitely the way to go here.
I have to mention that both these games have been superseded by Ys IV: Memories of Celceta for the PS Vita which is now the canon Ys IV game.
This does not make the story of Ys IV any less important for me though, and in my mind the PC Engine game is the canon story. Memories of Celceta changes the story in some ways to match stuff from sequels like Ys 6, 7 and 8 which is fine but some of the connections between Ys: Book 1 & 2 and Dawn of Ys is cut from Memories of Celceta which is really a shame. This was probably done so Memories of Celceta could feel more like a stand-alone game but for Ys veterans you will miss all the connections and references to Ys: Book 1 & 2