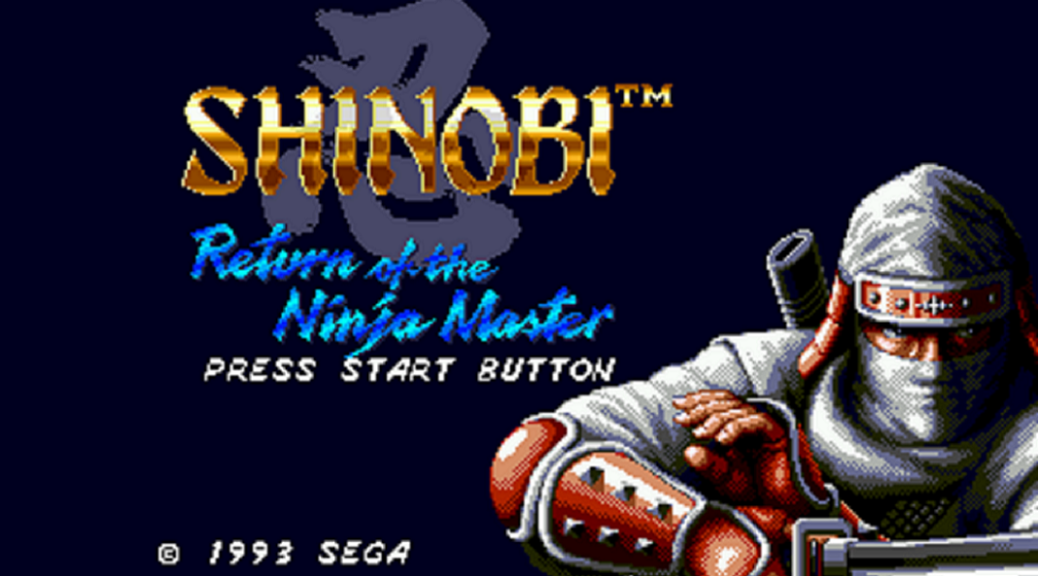 So much more than just Sonic, the Sega Mega Drive did not miss out on the Ninja craze of the late eighties and the early nineties. Shinobi III: Return of the Ninja Master is the sequel the more known Revenge of the Shinobi, who was the sequel to Shinobi on the Sega Master System(and some other systems). I just played Shinobi III: Return of the Ninja Master for the first time last week and felt that it was technically much superior than its predecessors and the best game in the series. Check this review out to see how good it is.

In Shinobi III: Return of the Ninja Master you play as the master ninja Joe Musashi in an action platformer where you have to go stop the bad guys from doing… something because of….something, I’m not even sure since it doesn’t really say and my game is missing the manual but hey who the fuck cares?! I’m pretty sure you didn’t come here to read up on the Shinobi series’ lore…Lets start to cut up some bad guys!

Joe Musashi has some sweet arsenal of moves. It took me a while to figure out the full controls and how to utilize them best but when you get used to them this game gets insanely fun. I could do everything i wanted and this arsenal of moves left nothing to be desired really, that’s how good it felt. You walk, run by double tapping, make a running attack slice, throw shurikens (you bread and butter move), throw a barrage of shurikens in the air and jump attack where you drop down on your enemies, bounce back up so you can jump attack them multiple times in succession(my favorite move in the game). You can double jump but it can be a little tricky to pull off. You have to time the second jump at just the right time and even though i got pretty good at it i never relied on it since i always knew it could fail and i would die/take damage which is kind of a bummer and really the only fault i can find in the gameplay. Luckily i do not think there is a part where you absolutely have to double jump, so you don’t have to rely on it. It is more of a luxury maybe.
You throw shurikens by just pressing the attack button in limited(but plenty) quantity, but when you get closer you kick or slice them with your sword for greater damage. Very cool. And that is what this game is. Everything you do is so fast paced, fluid and cool.

Joe Musashi controls like a dream, and oh yeah, he can also wall jump. What a champion… The levels are very cool, well designed and good looking. It is very quick to go from traditional ninjas to bio factories, oil rigs and more modern looking settings, and some stages even scroll, moves forward while you race through the stage fighting enemies whether it is on horseback or on a surfboard, Joe Musashi can do it all. I’m more of a traditional setting fan so it would have been nice to get one extra stage similar to the first one, both to make the game longer and to satisfy my fascination with the past.
He has 4 types of abilities(ninjutsus) which you choose from the start menu and use with A: 1 makes him invulnerable for a few incoming attacks, 1 makes him jump higher for the remainder of the stage, 1 damages everything on the screen and last but not least is where Joe makes himself explode, losing one life and damaging all enemies on screen and then respawning with full health. Doing this is a smart move when you have only 1 health bar left so you will respawn right away instead of going back to the last checkpoint. That jutsu is very important to use on bosses and especially the final boss who is very tough to beat with just 1 life bar.

It is amazing how many moves he has using only 2 buttons since the 3rd button is just for ninjutsus. I guess the Sega programmers had mastered the console by this time. The game comes out in 1993 and feels extremely smooth and well polished. It looks great too. The sprites and very well done and the backgrounds are amazing often scrolling in three layers, one of many cool looking effects in the game. This game really showcases what the Sega Mega Drive can do.

The soundtrack is very good too. Most would argue that the soundtrack for Revenge is better but here we get very melodic Japanese/ninja style action tunes that are in perfect sync with what is happening in the game. Top notch stuff.

Shinobi III: Return of the Ninja Master is a tough game to clear. You have four difficult settings: Easy, normal, hard, hardest. The game does not change based on the setting but you get less health and lives the higher the difficulty setting goes. In easy you get a whopping number of 9 lives and 3 continues so you should be able to beat the game on your second playthrough at least, but on normal the lives dive down to 2 lives and that is were things get really challenging. In hard and hardest your health meter also get smaller so you can challenge yourself plenty of times with all these difficulty levels, making the game last well but i wish they would have made maybe one more stage similar to the first one with minimal platforming and more fighting.I am probably just being greedy here though since the game has a total of 7 pretty long stages but still, maybe it could have been 8….  Anyway, it has been a while since i cleared a game, and then immediately stated a new game to try and clear it again because it is just so fun. This happens every once in a while and it is such a great feeling. I really love this game .

I failed my first playthrough on easy because of the grueling platforming death traps all around the last 2 stages. I have to admit i got a little frustrated with the number of instant deaths, since there is a lot of climbing and hanging in this game with nothing below you but your horrible death. I always like when if you die fighting in an intense fight rather then anti-climatically fall to your death when nothing is going on. While this is a small issue i won’t make too much of a fuzz about it since it is not as bad as Super Castlevania IV in this aspect for example. In the second playthrough i knew the stages on easy and got good at platforming with Joe so i cleared it easily but on normal i needed a few tries, and the feeling you get for beating such a tough game is priceless. Next time i will give hard mode a try.

Here is a great tune from the game, not necessarily the best song on the OST but i never got bored of this no matter how often i dies and had to repeat this stage:

Overall, Shinobi III: Return of the Ninja Master is a wonderful game, on all accounts.The move set of Joe, environment and the controls are just phenomenal and such an upgrade over Revenge of the Shinobi which is also a good game but honestly i think the only ones who think that Revenge is the overall better game is seriously infected with nostalgia since it is in fact the more known game since it came out early in the Mega Drive lifespan and was included in the Mega Games cartridges. One factor might be that the OST in Revenge was made by Yozu Koshiro who has a huge cult following andmade the Streets of Rage 2 OST. I like his work but I’m not a super fan, so don’t flip out if you think i give his OSTs not high enough scores in the future.

It has been a while since i played such a quality action/platforming game which is one of my favorite genres. I have always liked Mega Man, Castlevania and this Shinobi game more than Mario, Donkey Kong and Sonic so this game is right up my alley, and it might be up yours too (hehe, up yours). Pick it up wherever you can cause this one is a great one, possibly the best game ever released for the Mega Drive/Genesis. Yeah… i mean it!

Available for the Sega Mega Drive in all regions and as a part of various Sega collections including Steam for only 3$!