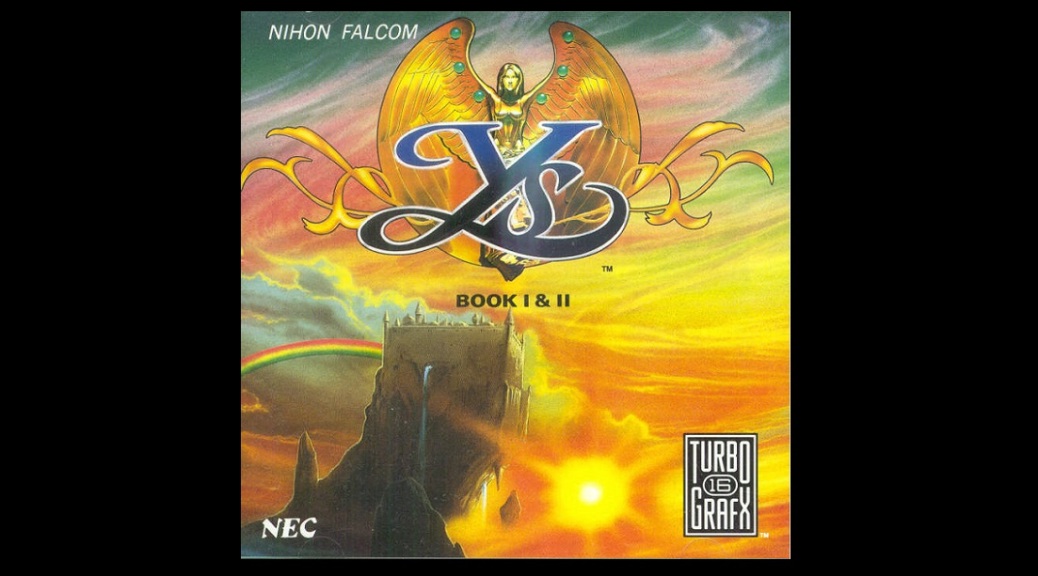 On goes my grind through the Turbografx/TurboCD/PCEngine library and mehaaan did I pick a good one this time. I was finally in a mood to go through an RPG and I had heard from a couple of people that Ys was then a good way to go. The game is a compilation and a remake of Ys 1 and Ys 2 that were originally released for the NEC PC-88 in Japan. Most video gamers do not even know what Ys is! At least that is the case here in Europe where the Turbografx didn’t even get a proper release and it probably isn’t well known the states either since the TurboCD never really caught on which is a real shame because the CD format opens up so many possibilities including CD-quality music and cinematics.

All that aside, I played the game and now join the proud few who herald this little-known gem of a video game as a masterpiece that should be mentioned side by side with all-time great games like Final Fantasy or Zelda.

You play the red-haired protagonist Adol who has on one of his adventures stumbled upon the land called Esteria. By the name of the land you can probably guess that this world has a fantasy setting with swords shields spells and everything that entails. Then after an awesome piece of cinematic opening, you enter a harbor from your ship and immediately you meet a mystical woman who tells you about the once great but now lost kingdom of Ys. Being one of those types who just love to take on a new adventure, Adol agrees to find all 6 lost books of ancient Ys who are supposed to hold vital information and powers of old and long-lost kingdom of Ys.

Right off the bat, I know into something special. Immediately I am curious about the fate of ancient Ys and feel like I have to play on to watch the story unfold which is always a great feeling. The opening video above tells the story of the game of Ys followed by a cinematic of Adol coming to Esteria along with the sights of Esteria and it also shows us some supporting characters all playing under top notch, catchy CD quality music. I really recommend watching the video before you continue reading but I guess I can’t tell you what to do… 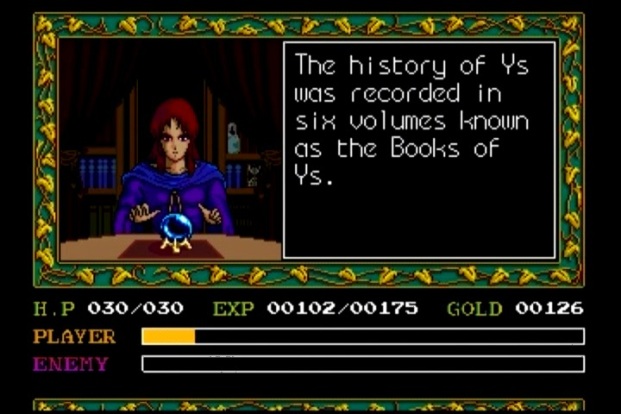 After all that stuff, we finally get to the gameplay and to be honest… It’s kinda weird. You go to the shop and buy a sword and shield and then you have to grind a little bit to get an armor outside of the first town where you see some soldier footmen guys roaming around and you attack them by running into them. Yes… there is no button for swinging your sword, raising your shield, jumping or anything. You just run and bump into them.

Before you X this window on your browser, hear me out. This system isn’t bad really, and actually, it can be pretty fun. You can get enemies from the rear, flank or front and really have to make sure that you are moving towards them and not the other way around or you will take damage. You cannot just run through the whole game since many enemies can take a lot of hits and can, therefore, hit back if you walk through them or if they are against a wall. Getting surrounded can also lead to some hard times but sometimes it feels like you will die some cheap deaths but that’s ok because you can save your game anytime you want. This should never make you feel like you have to do some parts of the game again as long as you remember to save regularly. Later in the game, you get magic like a fireball projectile that gives the gameplay a tad bit more variation but as an RPG the gameplay revolves around finding and talking to people, getting information and finding out what to do and where to go next.

Despite the simple fighting system the boss fights really stand out. Most of them are clever and innovative. You always have to figure out how to fight every boss and probably will end up dying at least once per boss unless you are seriously over-leveled which brings us to a point which is as true about Ys as it is with almost all RPG’s. You can always just grind for gold, buy better equipment and level up if you are having a hard time with an area or a boss. I have never thought of this as a bad thing although I know some do. Getting new equipment and leveling up feels as good now as it did when games like Ys Book 1 & 2 were new.

The game encourages exploration as you can find many hidden items and equipment that will aid your quest plus it might just help you level up a little bit while at it. You might get lost and get into a situation where you don’t know what to do next but those should be minimal if you pay attention so you should not need a walkthrough to get through Ys whole and sane. Long dungeons test your perseverance instead of making every “weird” bump fight super difficult. Nearing the end of the biggest dungeons will make every little earlier mistake count (until you get the heal ring).

To sum up, Ys is an action-RPG with a bit of a weird bumping attack system that seems a bit off at first but will grow on you. It includes all your basic RPG elements like exploring, finding items/equipment, beating(bumping) up bad guys and leveling up which is a formula that always works well and does so especially well in Ys Book 1 & 2. Plus it has amazing boss fights…

The graphics are very good for a 1989 game. There are a lot of mid-game cinematics with portraits of the ones talking that have proper voice-overs and lip sync that would blow your tits off in 1989. I was happy to see that the voice overs are actually pretty well done. Video games from the 90’s were notorious for having bad voice acting but not Ys, in Ys, it is very good and should have been the standard for future games like Symphony of the Night….There are stills of merchants and other characters when you enter their house look amazing and all that would be impressive enough but the normal in-game graphics really hold up and do not let much to be desired from a game this old. The video below is from a longplay and is set to start at one of those mid-game cinematic with a voice over.
Take a look **very minor spoilers**.

What surprised me the most though was the music. Being on CD format, the sound quality of the game is as good as it can get. No more blip blop chip sound music, Ys sounds like the real deal. The music is very late 80’s-ish in both Japanese and western regard. What I mean by that is that one tune is like a Mega Man cover band while the next could be an opening for Guiding Light or some soap opera.
The type of the music is not what matters most to me though, what matters is that the Falcom Sound Team just keep throwing epic quality stuff in your face one after another as you go through the game and you just have to keep up and watch out that your mind doesn’t blow up. This example below is maybe not the best tune in the game but it is my favorite for being so ultra epic even though you are just exploring some dirty sewers. Check it out!

Overall Ys 1 & 2 on the TurboCD is an amazing action-RPG that really leaves you as a more complete person than you were before you played the game. It will really stick with you. The cinematics, music, the story and the mystery surrounding ancient Ys really ramps up the game to an A+ level. I mean it even inspired an anime series based on it.
Like the name implies this game is a compilation of 2 games so it is long and in addition to that you will want to play it again for its sheer epicness so this one really lasts.

It I available for the Wii virtual console as well as PlayStation Network in Japan. The remake of this game Ys called Ys Chronicles and is available on multiple platforms but this  Turbografx/TurboCD is definitely the way to go!

Do you agree or am I crazy? Take part in the readers poll and tip the overall score in your direction!