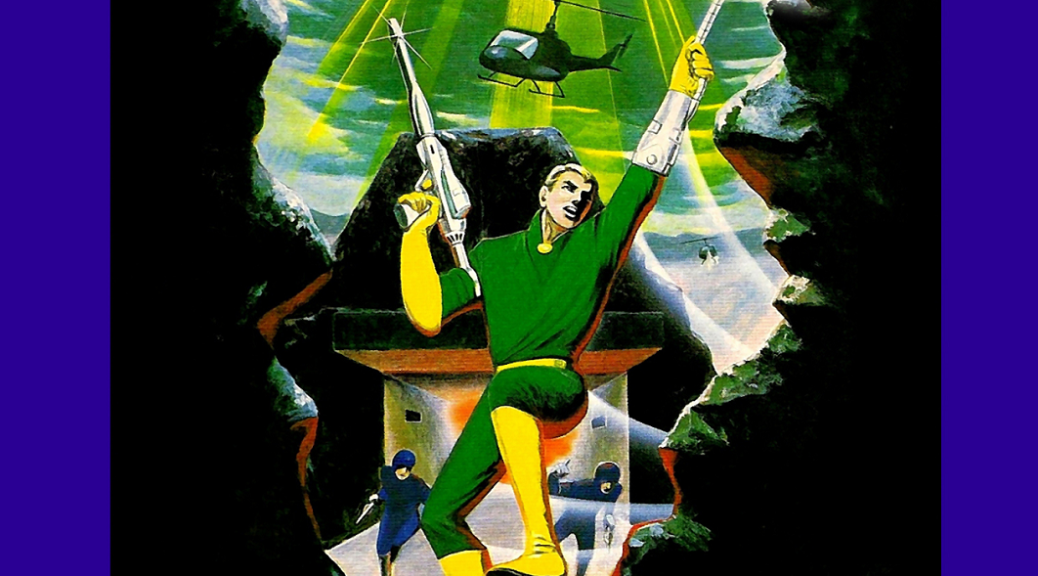 What is the deal with that cover?! Haha ,well sometimes NES covers were not so cool or well thought out but Capcom had a score of great games on the NES even though the covers of their games left much to be desired. I never owned Bionic Commando as a kid but i knew of it and borrowed it a few times i remember it well but i was never even close to finishing it. Now that i am a grown up i can buy the games i want! Well,i got a copy of a PAL Bionic Commando and played it through. Let’s find out how it holds up 27 years later.

The game is a platforming shooter that takes place in a world war sometime in the 80’s. In Japan the game is actually called”Hitler’s revival” so the bad guys’ goal is pretty obvious. But that kind of stuff doesn’t fly in the United States and especially not in Europe so the game title was changed and the Nazi swastikas were replaced by an empire looking eagle. But the guy they are reviving still really looks like Hitler.

You control Nathan Spencer, the one man army who is out to foil the empire’s plan and rescue his predecessor who seems to have gotten caught, the other one man army “Super Joe”.

You start the game by seeing the map pictured above. This is the stage selection.White tiles are full stages, pink ones are neutral zones, there you can find new equipment and hints. Green trucks take you top-down view shooting brawl.

You shoot with one button, and use the grappling hook with the other. That’s right, this is a NES platformer and you cannot jump. How is that even possible? Doesn’t it limit the game too much?… Not really, Bionic Commando’s grappling hook is the game’s main gimmick. The hook actually feels very solid, and swinging around is a fun and a unique experience. It just  takes some time to get used to not being able to jump, after that you won’t miss it at all. Another thing is at the beginning of the game you can only take one hit and you are dead, so the game is a bit unforgiving while you are getting used to it, but if you shoot guys and collect the green containers they drop your max health increases and the game becomes more fluid. Shooting feels fluid, ducking and swinging around in addition makes for a very fun shooting action. As the game progresses you can get better stronger weapons and some accessories that help you move forward in the neutral zones. The hints you get their can be a little cryptic and if you don’t pay attention you might get stuck not knowing where to go which might get annoying. So if you are very impatient with that kind of stuff you might want to peek into a guide before you get bored.

Bionic Commando’s action is not particularly fast paced, not at first at least. It is more about positioning and planning how you are going to deal with the enemies you see. It is an infiltrating game but it is not a really a stealth game but you can avoid and bypass a lot of enemies with smart use of the hook . Some stages even have multiple paths which is always fun and makes you want to play the game again.But many of the enemy soldiers are patrolling and some of them won’t attack you unless you come too close to them, so that makes up for a bit different experience from the “shoot everything that moves” structure that is often in these games.

The game gets very difficult. You start out with 2 continues and finishing the game with just those continues is extremely difficult. The game is also pretty long, as you can see on the map there are many stages and the stages themselves are pretty long too. Of course, this is a good thing so thankfully, if you are not up for the challenge you can farm unlimited continues like in the picture above. I normally do not like to create my own challenges in video games, decide by myself how many continues i have or decide to make the game harder for me by not equipping new weapons. I feel like the game’s difficulty should be a constant and that you should beat the game based on what the developers thought was easy or difficult. Beating the game with 2 continues feels like a legitimate challenge though, i am thinking more of other games with this digression(like Castlevania: Symphony of the Night).

One bad thing about it though is that Bionic Commando does not have a password feature or a save battery so you are going to have to play it in one sitting, unless of course you are playing on a different format.

The game looks pretty good and the tunes are pretty good too. The avatars of the people talking to you, kinda like in the codec in Metal Gear look very cool, even the resurrected evil man(Hitler) is done pretty well too. The encounter with him and many of the innovative bosses are really fun. Visually it looks good but nothing really outstanding to me, the environment is also cool.

In the end i recommend this game to anyone dipping into the old NES games, it’s challenging but you never have to start from the beginning if you farm continues. If you are playing it on the NES you might have to leave the console on and finish it later while you do other stuff cause you cannot save or use a password which kinda sucks. But the shooting, hooking infiltrating action is very fun and the bosses are too. It is long so that is a big plus even though you cannot save and i bet i will play it again.

Take look at this longplay to see more ***spoilers***

Time for the score 🙂