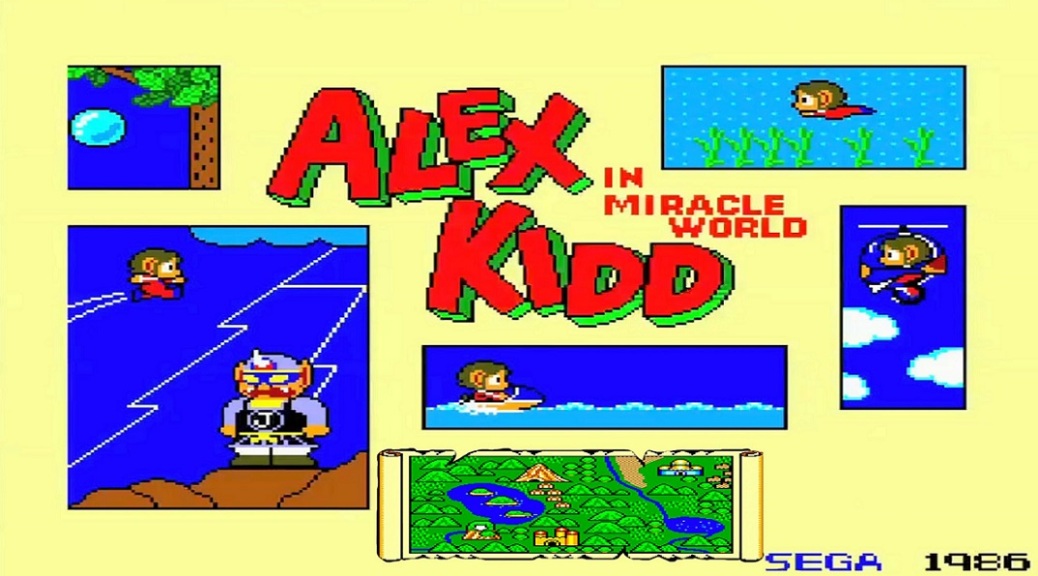 The Sega Master System makes it’s debut to Cousin Gaming! By coincidence i got my hands on a Sega Master System for the first time but i have to admit that before now i had never ever played a Sega Master System game (except some on the Game Gear). I looked up what games are the best ones on the system, got myself an everdrive and started with a game starring what is considered the former mascot of Sega. It is one the most talked about game that was exclusive to the system, Alex Kidd in Miracle World. Let’s see how it goes!

Alex Kidd in Miracle World is a cute little platformer that was a must have title for the Master System. It was even a built in game for some models of the Master System. We review games based on how fun they are to play in the present day but sometimes i give really old games like this one a little break if it needs one.

Alex Kidd in Miracle World was released in 1986 around the same time as Super Mario Bros which it was most compared with since the gameplay of the games turned out a bit similar.
Alex Kidd is the lost prince of a kingdom that has been taken over by some Rock, paper, scissor jerks. Alex Kidd must make a return and save his misgoverned land from the baddies!

The gameplay is pretty simple. You jump and punch! Alex Kidd has a freaking huge fist compared to his body which is his weapon and way of attacking enemies compared to Mario’s jumping. You die in one hit so if you are in too much much of a hurry you will die a lot! There are no mushrooms or something similar in Alex Kidd to give you an extra hit point which i feel is needed to keep the game more fluid but it gets better when you get used to the controls who are pretty good.

Alex Kidd moves smoothly and his jumps feel nice, but he slides a lot and that will get you killed a lot making for some frustrating moments. The level design is pretty decent. generally this is a sidescroller but in you can often also go up and/or down especially in the later castle stages which are a bit like a maze. Enemy placements are fair but many enemies are just there, waiting to be punched by you and offer little variety.

Just hope that when you punch a  question mark box you will get an extra life instead of the biggest dickhole enemy in the game who kills you by just touching you like all the others, death who chases you relentlessly until you leave him outside the screen. I think that if you outrun death successfully in one question mark box, the next one will have an extra life.

In these boxes you can also find power ups that you can use by pressing pause (on the freaking console itself, not the controller because it only has 2 buttons and a d-pad which is fucking annoying, having to stand up) and pick the item from the menu. These powers ups are for example a power fist that makes your fist shoot energy much like Link in full health in the Legend in Zelda and a box that shoots a barrage of tiny Alex Kidds that attack enemies. These power ups are fun and add good variety in the gameplay. You can also buy these power ups in shops that appear a few times in the game with money you find throughout the levels. In these shops you can also buy one time use vehicles like a car or a gun equipped helicopter bike. These give you an extra hit point and are really fun to use but they are only available in a few levels.

You can also use money to get continues. If you press up and the the 2 button 8 times at the game over screen you can buy a continue if you have enough money. It costs 400$ which means that you will probably be able to do it like 3 times if you are sometimes going out of your way to find money or secrets.

One ridiculous thing about Alex Kidd in Miracle World are the boss fights. Most of the time you just have to win them in a game of “Janken” which is just Japanese for “Rock, Paper, Scissors” and if you lose you just die. Just that is annoying enough but they make it worse because it takes such a long time. Why would i want a boss fight based on just luck? It’s stupid and lazy is what it is. In later parts of the games they actually attack you after you beat them in Janken but their pattern is always super simple. The two exceptions from the Janken fights are the bull and the big sword bear who just try to kill you the old fashioned way. Those fights are really just about punching them head on but its something i guess. Still… its not like Super Mario Bros. had super sophisticated boss fights either.

Just to save you time and mental health here is their pattern:

The soundtrack is not very large or complicated. Like in Mario it is mostly the same song the whole time with a few exceptions but the Alex Kidd theme fails to reach the legendary heights of the Super Mario theme song. It is still fine and more than bearable. What is more impressive about the presentation of Alex Kidd in Miracle World are the graphics. They look really good, and even better than in contemporary NES games like Super Mario Bros and Metroid. The Sega Master System seems to be showing off superior graphics and colors to the NES in many cases. Alex Kidd just looks awesome and very colorful for a game that was released in 1986.

All in all,  Alex Kidd in Miracle World is plenty fun. The controls are smooth despite some sliding when trying to stop in tight platforming situations, the level design and platforming feels good, power ups add fun variety and the vehicles are especially fun.

The bad stuff includes the lackluster stupid “Janken” boss fights and annoying one hit deaths since the game has a lot of spikes and stuff but it does not ruin everything else that is good about the game.

The presentation is very decent and it is pretty challenging, especially when you don’t use the continue feature. It took me multiple tries to beat the game 7with continues so this cute little game actually lasts quite a bit. The only thing i am concerned with is that while this game is good and a great start to my Master System career, i hope that it is not the best Sega Master System game ever made like many say. That would be pretty disapointing since i want to make the most out of my new Master System and everdrive 😀
I will just have to play more and find out!

Here is a longplay in 60hz from the channel “World of Longplays”. Being from Europe i of course played the game in 50hz so it feels a bit different, especially the music.

The game is available on the Sega Master System of course as well as the Wii’s Virtual console and on the PS3 and Xbox360. If you are unable to find it by conventional means i am sure you know what to do 😉