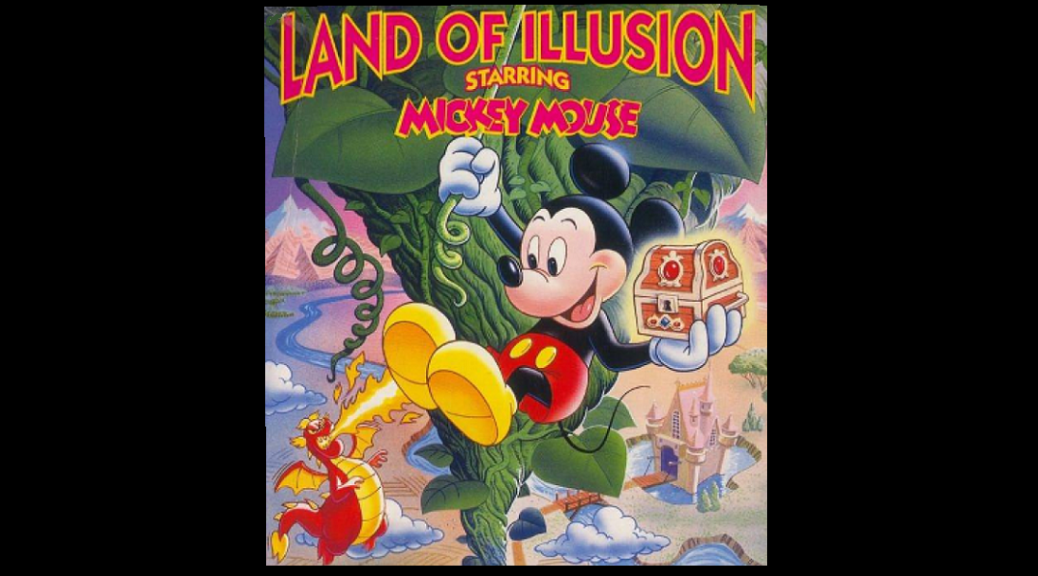 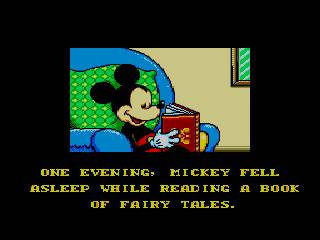 Land Illusion starts with Mickey reading a book of fairy tales in his home. He falls asleep but when he wakes up he is not at home, but a gloomy fairy tale land. There he meets Daisy who says that a guy called Phantom has stolen some magic crystal making evil magic spread all over the realm. Mickey of course takes it upon himself to stop Phantom and needs to go through 14 stages(some much longer than others). In his adventure he even meets some fun characters. Donald Duck, Goofy and even Horace Horsecollar make a cameo appearance.

Land of Illusion is your typical platforming game. You jump between various pits and hazards, and fight enemies by picking up objects and throwing in addition to Mickey being able do drop down on enemies while jumping in a sitting position, butting them to death. That is in fact your main way of dealing with enemies and feels very similar to the cane jump attack in Duck Tales but Mickey can only bounce on enemies, not on the ground or on spikes like in Duck Tales. The controls in Land of Illusion are tight and responsive and the jumping mechanics are solid as well as the physics of the game. The game feel is overall very good.

Every few stages you have to fight a boss that have some trick to them. The suggested age range of this game is probably a little young but despite that the bosses need a little thinking to defeat, and the stages have some very clever puzzles that are hard enough to make you think for a few seconds, but not hard enough to stop the flow and fun of the game which is perfect when playing this game today, some 24 years later. The game is not a 100% linear since some stages offer 2 paths and sometimes you have to backtrack to other stages to get items like the shrinking potion that makes you shrink or the rope that enables you to climb walls and get to places you could not get to earlier which is fun. The game itself is not that difficult and you have unlimited continues but you will die a lot and need a few continues. I would argue that if you only had like 3 continues than this game would be pretty difficult but that is not the case thankfully since there is no save feature or a password system.After you beat it there is not a whole lot to do, you can look for power stars that increase your total health. Those can be found in all of the stages and after you get the special items like the rope you can reach more of them but it serves no real purpose except for the fun of exploring the stages since the max total health is 5 stars.

The game looks pretty nice and the backgrounds are alive and colorful. The old fashioned Micky Mouse art style will grow on you and just makes the game feel more nostalgic. That coupled with some light hearted fun tunes makes up for a pretty solid presentation totally in sync with the atmosphere of the game. This tune below i found most catching it matches the heroic feeling of being almost finished with the game.

Overall i found Land of Illusion Starring Mickey Mouse a fun little platforming  adventure i can easily recommend. The game is just well made with good classic gameplay, tight controls, nice graphics and tunes. If you like this one you should also try Castle of Illusion or vice versa since both are similar and just really a matter of preference which is better. If you are looking for a good platformer for the Master System i recommend Land of Illusion certainly over a game like Alex Kidd in Wonderland which maybe has not aged as well (and it is 6 years older).