Ryu’s hometown is destroyed by some thugs and their sumo boss and some scroll is stolen that is very important… I don‘t really give a damn but the cutscenes look nice although they are not animated like the NES version.

What you will notice immediately is that the game has faster movements than the other Ninja Gaiden games. You can jump higher and further and you can even grab and hang on tree branches and stuff and climb up (or drop down). After a while you figure out that in this version you can wall jump a la Batman in the Sunsoft game on the NES. All this makes up for some fast paced ninja action that gives this version the crown of best controls out of all Ninja Gaiden games by far. The game also retains stuff like secondary weapons and the infamous knockback from the earlier games. The knockbacks are much more bearable in the Master System game since you can often safe yourself with wall jumping and hanging which is incredibly fun when it succeeds.

That is kind of the thing with the Master System Ninja Gaiden, it is really fun. The stage layouts are fun and fair for the most part and don’t have the incredibly annoying and unfair enemy placements and respawning of the NES original. In fact at this point it is kind of pointless to be comparing the two games since they are completely different, it’s not even developed by Tecmo. 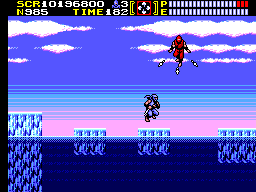 If you are familiar with my opinions than you know that I like difficult action platformers like Castlevania, but honestly I was never really a fan of Ninja Gaiden on the NES for some reason. I feel like the difficulty is more fair and less annoying in Castlevania and the overall atmosphere is much better. Ninja Gaiden on the Master System is neither of this; in fact the game might be too easy. The secondary weapons are really cool but really overpowered at the same time. The bosses are also a walk in the park in most cases since most of the time you have accumulated enough ninjutsu to just spam the secondary attacks until the boss goes down which is kind of a shame. I’m pretty sure that after you get 999 ninjutsu you have infinite power to spam the secondary weapons as you wish. You will still die a lot, the stages are by no means a walk in the park but with some persistence and basic to intermediate 8-bit gaming skills you will be able to clear this game in one fairly long sitting.

Ninja Gaiden on the Master System is a pretty long game for its genre but the game has no saves or password system which is also a shame. But like I said you can still clear it in one sitting if you are not dying too much and get frustrated, you might clear it anyway since the game is really fun to play.

Overall Ninja Gaiden on the Master System is a really tight game with amazing controls and stage layouts. The game is just very fun to play because of this and due to the fact that the game is not overly difficult or unfair like the NES game. Like I said, the game being too easy (easy bosses and op secondary weapons) might be a downer for some but at least you’ll get some fun out of that playthrough because of the great controls and fun stages.
Graphics are great and the music is pretty good with plenty of nice tunes.