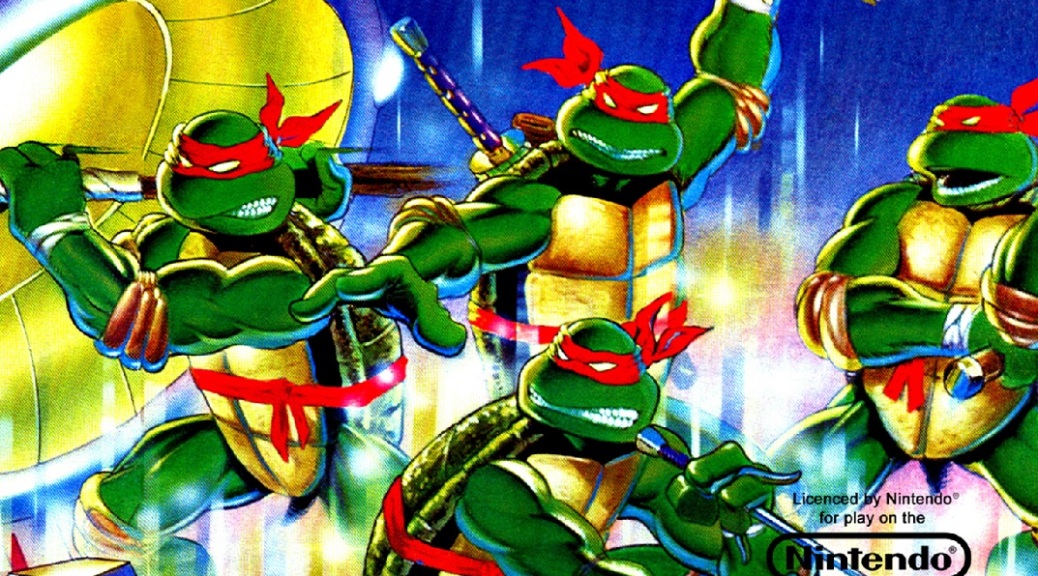 … Or Teenage Mutant HERO Turtles if you are from Europe like me. The first video game outing of the Turtles has been made infamous by the Angry Video Game Nerd for being overly difficult, cryptic and unfair. But in fact, for the AVGN and myself this is a beloved childhood game that we find fun to play despite its flaws.

TMNT for the NES is an open action-platformer, meaning that the stages are not just a linear side-scrolling trips from point A to point B. TMNT takes a different approach where the player has more freedom of choice as in you have alternative routes and you can choose to go extra routes for bonus health or an item.
This sounds like a good thing, and it is for the most part but in the beginners’ view this just opens up the opportunity to get lost and lose health on extra routes that are often not nearly worth taking. Ultimately there is one correct, fastest route that I know by heart now but it will take a few playthroughs to figure out because this game is plenty difficult and you have limited continues (2).
This way the game can get cryptic even unfair with some of the death pits, knockback and falls that send you back to the beginning of a stage. This is very likely to turn you off.

You play as 1 turtle at a time, each of one has its own health bar and you can switch between them on the fly. The turtles’ weapons vary in strength and reach and honestly they are pretty imbalanced. Donatello has slow attack speed but his attacks have the best reach and damage making him by far the strongest turtle. This is why Donatello has always been my favorite turtle (we didn’t get the cartoons back then here in Iceland).
This does not mean however that the game is not fun, sure it’s a little weird but the game has good controls and fun levels for the most part. Yes it has some unfair moments but the gameplay has good variety such as the overhead veiwpoint, swimming stages and mazes that are not just about going from point A to point B slaughtering everything in your path. The fighting is fun, and they kept it from going stale with variety and some nice boss battles to top it off.

The game looks really good, no complaints there. I guess some of the sprites look a little weird, and the enemies look random. In fact, most of them look nothing like Turtles characters at all. They have Bebop and Rocksteady, foot ninjas,the Technodrome and more but most of the enemies are just intelligible crap.
On that note, the game lacks are original TMNT music but it makes up for it by having some great tunes that gives the game its own identity. All tunes sound good, especially the boss tune. Sound effects are nice except for the BEEP! BEEP!! noise when you have low health.

Overall the game is good despite its flaws. It has enough content for you to do more than just clear the game in one sitting, but it will get frustrating at times. The game controls well, the stages are fun, the setting is nice ans the aesthetics are on par with some of the greats.