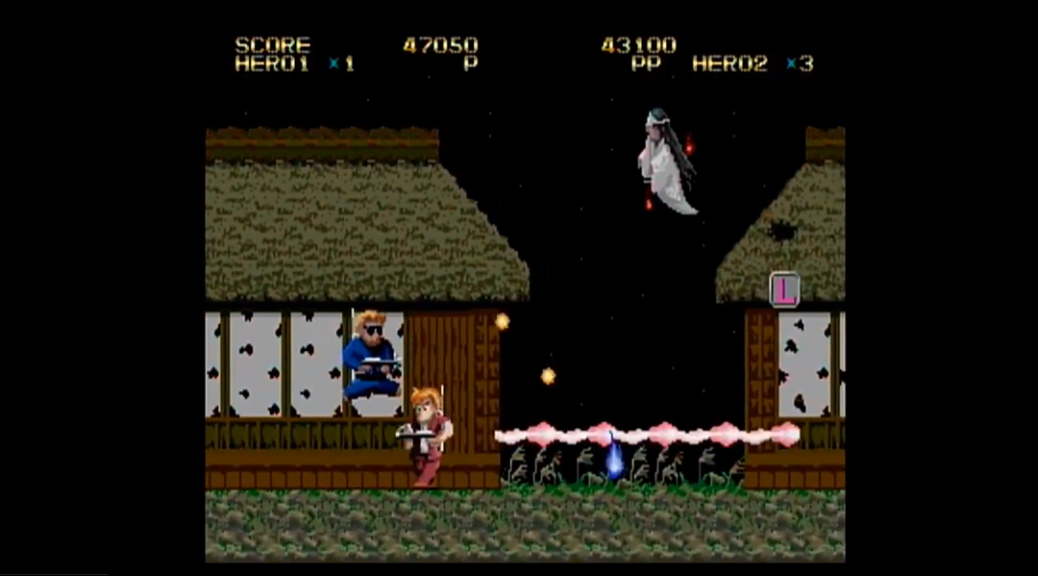 Horror Story is a fantastic arcade style game on the PC Engine. It is a co-op run and gun game developed by Toaplan (Batsugun, Zero Wing) and is clearly inspired by Ghostbusters in many ways. Here we get the Japanese take on ghostbusting as most of the enemies in the early stages are spirits from Japanese folklore.
I was thrilled when I discovered that the PC Engine had a sideview run and gun game like this, and I was very happy with the experience.

In Horror Story, you and a pal take control of some slick ghostbuster guys wielding guns capable of changing based on what power-up you have picked up identical to Contra. In fact, Horror Story plays a lot like Contra games, you have to stay on your toes, shoot incoming enemies and do some platforming but it has a few features that really make the game unique. The characters can double jump and you can kill enemies by jumping on them. These are key elements that make Horror Story a completely unique game even though it can easily be compared to Contra. At first I was a bit skeptical about the game because you can only shoot forward and backwards but the stages and level design are developed with that in mind so it totally works out.

As to be expected with the PC Engine, the levels scroll like its a horizontal shmup and you die in one hit unless you manage to pick up some shield power-ups. Somehow non-shooters on the PC Engine always end up having some shooter-esque elements in them….
Your guns have some pretty basic powerups that you can pick up pretty much whenever because they just keep popping up. To name a few, you have a widespread aoe shotgun, powerful laser, missles and short ranged bombs that melt down bosses.
The controls are smooth, you repawn where you die and even though the game is challenging, the difficulty is adjustable and paces well giving the game overall good game feel.

This is the gameplay video we recorded ourselves, showing this game is really better than it is explaining.

The graphics are very good for a PC Engine game and the art style is very pleasing with many beautiful sprites. The music is OK, nothing to blow your tits off but its there and gets pretty good at times.
Overall Horror Story is just a really solid run and gun game that I recommend especially since the PC Engine/Turbografx16 is a bit short on co-op run and gun games. The game is really expensive now so you might have to emulate it, burn it or get a repro from PCE works. Either way I guarantee that you will have a good time.