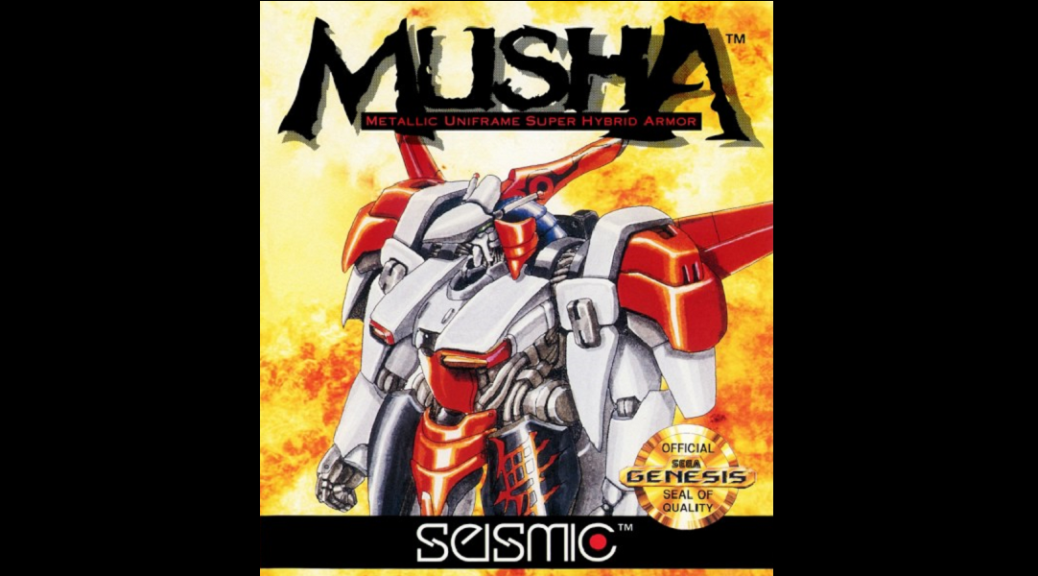 M.U.S.H.A(Metallic Uniframe Super Hybrid Armor) or “Musha Aleste” in Japan is a shooter made by legendary shooter developer Compile for the Sega Mega/Genesis in 1990. The game is already infamous for the price it fetches these days which can be well over the 300$ mark. Many claim this is simply because the game is worth it, but of course Musha is also a very uncommon game.
It is pretty unbelievable to say that a game from 1990 is well worth a 300$+ price but this is what I am here to find out with my trusty Chinese repro cart w/manual which actually looks pretty good.

M.U.S.H.A is an entry in the “Aleste” series which was Compile’s main line of shooters at the time. Other shooters by Compile include Power Strike(Aleste), Spriggan, Gun-nac and Robo-Aleste but Musha might be the best of the bunch.

The Mega Drive has 3 buttons you say?! Yes, the 3rd button controls your little buddy ships. You collect tokens that drop from enemies and for every 3 token you get a little buddy helper ship. You can have 2 at a time but you can collect more for spare because if those buddies get hit they die. The 3rd button gives them orders such as shooting front, along the sides, back or you can set them free and they fly and shoot enemies automatically which is very strong but a bit risky.

All these options make up for a pretty fun and varied gameplay, but that of course would not mean anything unless the level design is good too. Luckily, they are all well paced  with cool enemies, mid-boss and a final boss.
The game starts off pretty fun and fluid, as in the first few stages are a bit easy and make you feel like you are superb at shooters. You still need to stay on your toes, and the good music and colorful graphics make sure you won’t get bored for a moment. In later stages it starts to get a bit rough but overall Musha is a bit on the easier side compared to some of the shooters of the time. Maybe that is because I played the game at 50hz slow PAL.

Musha looks great and sounds great but the music has some annoying shred sounds the Mega Drive so often uses in games like this and Comix Zone. I also played the PAL version of the game so the music was a bit slower than normal but honestly I like it that way. The normal version is an unintelligible mess at times even though the melody is great at other times.

Overall Musha is a shooter with superb pacing that eases you in and then slowly welcomes you to the shitshow. You various methods of attacks keep the game fun and the bosses are OK. The presentation is beautiful for an early Mega Drive game and the music is awesome but the Mega Drive sound chip might not do it justice.
Musha is an awesome shooter but if you compare it to a game like Soldier Blade that was released a bit over a year later then they has similar graphics but Musha has worse music, worse levels, worse bosses and a worse final level.
Still well worthy of your time, but nowhere near worth 400$.