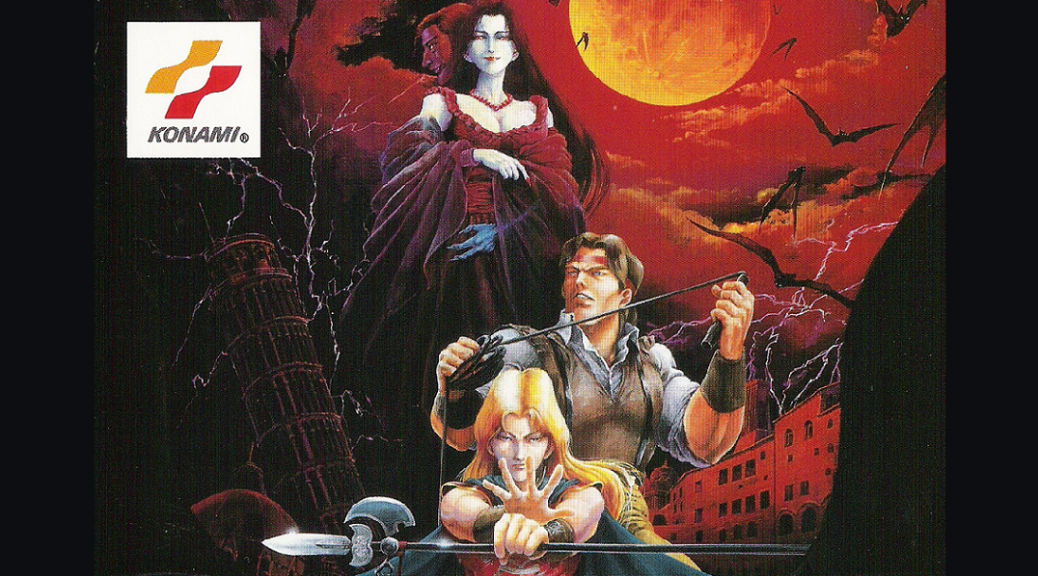 Sega finally gets some of that Castlevania action! This time set in the 1st world war. Two vampire hunters face the resurrection of Dracula in the absence of the Belmonts. John Morris who is the successor of the Vampire Killer whip of the Belmont clan and Eric Lecarde who wields the Alucard spear join hands in Castlevania’s first shot at a Sega console. Let’s see how they did!

First, The European version is censored. The American and Japanese version and much more bloody as the American title “Bloodlines” suggests. For example when Eric dies he gets impaled by his own spear. I don’t really care for that kind of stuff and being from Iceland I played the European version which is still the same game anyway.

Anyway… Yes, there are 2 characters and neither of them is a Belmont. John Morris hails from Texas and Eric is from Spain. John Morris is probably the standard choice for your first playthrough since he plays much more like the other Vampire Killer wielders while Eric offers a bit different but fun twist to the way the game is played. Playing as John is kinda like the compromise between Super Castlevania IV(SCIV) and the NES games. John Morris can hit forward, but in the air he can hit 45° in the above direction as well as straight down. He cannot change his jump direction mid-air but can turn around in the air and attack the other direction while still moving in the originally jumped direction like in Rondo of Blood. The game does not offer the short jump like in Rondo of Blood which is a shame. All these control details apart, by themselves they are very smooth. I have no major complaint about them except maybe that again they left out the defensive stance introduced in SCIV.

I feel like the Konami developers agreed with me when saying that the 8-direction whip is broken because we never saw it again. Many were disappointed with the games that came after SCIV because of this but it is for a good reason, even though reviewers from big sites don’t realize it. In Castlevania: The New Generation you  still get a few new directions to hit in, and the 45° whip can hold on to all ceilings in the game for John to pull off a swinging move when platforming which is very cool and actually pretty fun. Eric can attack with his straight up and make a huge spear leap which is basically a super jump.

Both characters can use the only 3 available sub-weapons. The new boomerang that is very strong and kind of overpowered I think and then there are the axe and holy water. I would have liked to see more sub-weapons, maybe even one more new one while they were at it, but a good thing about those that we are given is that all the sub-weapons have a semi item crash like in Rondo of Blood. In Rondo of Blood the average item crash would consume like 20 hearts and have a tremendous effect while the item crash in The New Generation consumes like 4 or 5 and the effect is less than in Rondo of Blood but significantly stronger than the regular use of the sub-weapons. The Sega Mega Drive of course has 3 buttons so the sub-weapon command has its own button while the semi item crash is up+sub-weapon button. Always nice to have some extra buttons in a Castlevania so you can use sub-weapon next to stairs.

Having two main character is a good thing, and it almost makes up for the game only having six stages which is the lowest in number of stages in the classic Castlevanias. Most of the stages have cool bosses and mini-bosses although 1 or 2 of them just look stupid. The 3 final bosses are kind of mehh to be honest. Death brings up bosses from past stages which i think is pretty cheap, and the vampire chick has a very easy pattern so you can’t lose to her once you figure it out. The Dracula fight is ok, maybe easier than most. As for difficulty this game stands out since it has limited continues and 3 difficulty settings never seen before in a Castlevania. I can get on board  with that since I like the limited continue feature in many games, it puts you on the spot right away from stage 1 since you most definitely do not want to lose a life there. It can get frustrating having to start the game over, but then again it only has 6 stages and a password feature. Your password is bound by the number of lives and continues you had when you got the password so a password for stage 3 with 1 live left is useless really since you won´t be able to go through the rest of the game with just one life.

These stages are well designed and have a lot of original enemies adding to the standard skeleton, zombie and bat standard.  All stages happen in various places around Europe and they look very good. At first I thought the choice of colors was a little off but I got used to it. It has some very sweet effects, cool environment destruction graphics not often seen on the Sega Mega. Some backgrounds like in the 5th stage are based on real architecture from Versailles and around there which is pretty cool. Generally it looks good but could use some improvements on some sprites and color choices.
The music is very good. The tunes for stage 1 and 4 and especially good and it is always good to have a great 1st stage tune to set the mood and get the blood pumping. It sounds very much like Mega Drive music but that’s not bad really. The music was Michiru Yamane’s first crack at a Castlevania game, she did very well I think and she continued to make music for Castlevania and became the head composer of the legendary “Symphony of the Night”.

Longplay! See for yourself ***Contains spoilers***

Overall I think Castlevania: The New Generation is a very solid Castlevania title that takes a little different but fun approach. The limited continues and difficulty levels are different, I can’t say if it is good or bad, it’s just different. What drags the game down is that it only has 6 levels which means less lasting appeal and less music. The early 20th century setting, art and the few great tracks the game has bundled of course with very solid Castlevania gameplay makes up for a very good game that I recommend for all Castlevania fans, but if you are new to the series I still recommend The first game, SCIV or even Rondo of Blood.