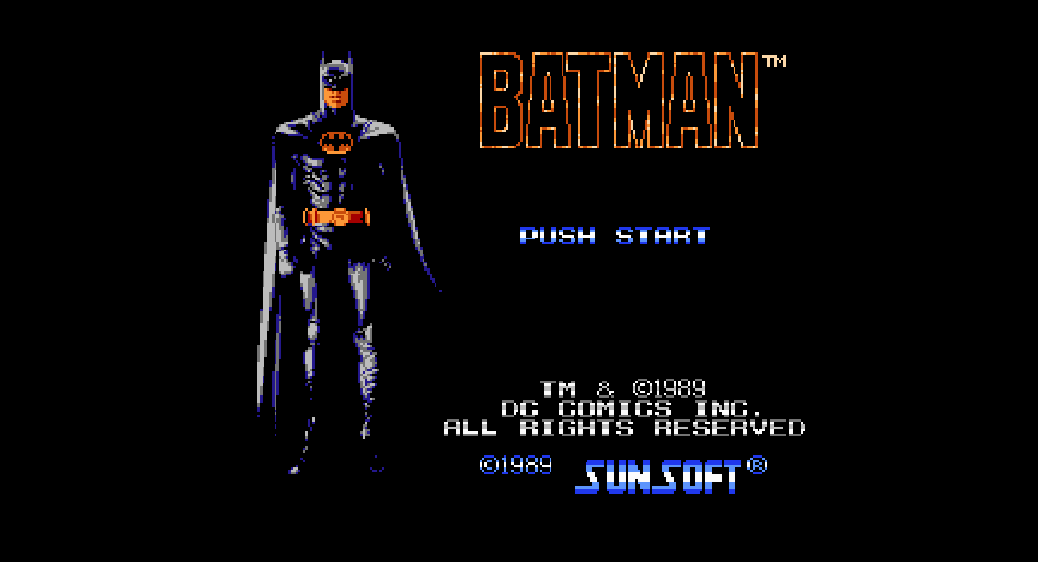 A buttload of Batman games have been released over the years, but this Batman game from Sunsoft on the NES is the real deal, rising from the pile of crap that are the rest of the Batman games from this and the adjacent video game generations, and showing you how quality franchise games should be made.

You play Batman, mission, kill the fucking Joker. The game starts off with killer animation of Batman storming the bad guy base and you start beating up assholes right from the get-go in a cool dark knightish environment. This is a pretty typical side-scrolling action game, in a way like Castlevania  perhaps. You jump, punch and use one of your three weapons; boomerang, pistol or the flame discs. You scroll through the weapons with the start button and pick what is most appropriate for each situation. Punching and the boomerang are your bread and butter moves while the pistol and flame discs are more situational. Punching is free, but your weapons have shared finite ammunition. You get ammo from enemies and each weapon takes 1 ,2 and 3 ammo respectively in the order mentioned before, the boomerang taking only one piece of ammo of a total max of 99 so you have plenty if you play smart.

Not only do you have plenty of moves, but they all feel awesome because the game plays so well. The controls are top notch, you are totally in control Batman, and if you mess up, it is your own fault and not the games’. Like the game isn’t smooth enough, it adds a cherry on top by giving you the ability to wall jump,and just like with all the other moves, you can execute them with precision if you get good at it. The wall jumping opens up excellent options for great level design, and with the variants in weapons and original enemies there is not a boring moment in Batman. The bosses are pretty cool, some are better than others but nothing to really complain about.

What you might notice in the later stages of the game is that the games’ difficulty spikes pretty hard. You will die,a lot! But that is okay because you have unlimited continues and never have to start the game from the absolute beginning. We must have played through the last stage of the game 10-12 times, and that is saying something cause we are Sunsoft Batman veterans so be ready for a real challenge! What is great about the challenge of Batman is that it is fair but not frustrating so it will be fun the whole challenging time. I love difficult games, but difficult games have to be fun to play if you are supposed to last all the way through the end, if not then its like….. what’s the point?

Well, Batman is fun all the way through. The only problem being is that it lasts only 5 levels. Yes the levels are kinda big and have many sections, but they still could have added a stage or two i feel since i know for a fact that Castlevania 3 had a buttload of levels.The game still lasts well because of the difficulty. Heck it has lasted me twenty-something years since i just played it again, for the first time in quite a while though…

The game looks great, sprites are very well done and the background is dark and eerie which 100% captures the Batman atmosphere. But what stands out even more than the wicked visuals is the insanely good soundtrack. Sunsoft Batman on the NES has one of the best original soundtracks the system has to offer.It will fucking blow your tits off. The only bad thing about the soundtrack is that with more stages it could have added some more, same quality tunes to rock our world. The last stage of the game has the same music as the first stage which was a bit disappointing so maybe they ran out of time or money to make more stuff. Just give it a listen.

Sunsoft did an excellent job here(27 years ago), the gameplay is impeccable, the levels are great (but a few more levels would have been nice), the presentation is epic as the OST is insane and the visuals are very solid. The games’ difficulty will keep you engaged, and finally beating the game will feel extra good and rewarding. Just overall an awesome game, a must for action game fans and all Batman fans.