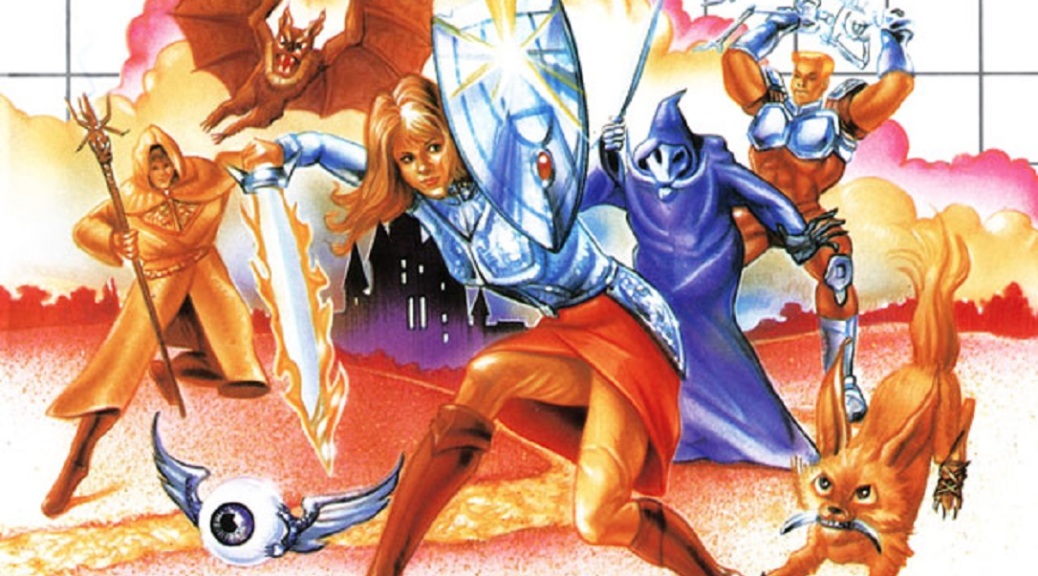 Cousin gaming continues grinding through the Sega Master System library! This time i played Sega’s answer to Final Fantasy and Dragon Quest. Phantasy Star was a must get game at the time, a game that probably moved more Sega Master System consoles than any other game on the system.  8-bit rpg’s tend to not age very well though, but let’s take a look at how Phantasy Star holds up 28 years later.

You start the game in control of the female protagonist Alis. She is hellbent on finishing her dead brother’s task of killing the oppressive king Lassic who is supposedly  a huge dick. The first thing you notice are nice looking animated storytelling sequences. I did not expect storytelling on this level, or even characters with a personality and name for an rpg of this era so that definitely impressive. You start to find companions to join you on your quest fairly early in the game ending up with a total of 4 playable characters. What makes this game even more unique is the fantasy/sci-fi setting. You fight with swords and then, space travel! Yes, the game takes you to 3 unique planets of the Algol star system with many races of people that the evil dick King Lassic controls with an iron fist.

The gameplay is what you expect it to be. It is turn based random encounters a la Final Fantasy and Dragon Quest. You have attacks and magic, although most of the time you will just be spamming attack. Your characters level up and get new predetermined magic based on your level. Your team is made up of basically a warrior, barbarian, white mage and a black mage so even though all the skills are predetermined the battles offer some nice variety. dungeons can become pretty long so like in most other games like Phantasy Star you have to be smart and not waste your magic points.

While the gameplay may be considered pretty basic and generic today, Phantasy Star manages to seperate from its peers with its unique setting, story telling and the 3-D dungeons. Bring out that pen and paper because you will get lost in these labyrinths possibly ending with you losing your mind. Most of your destinations are caves, dungeons, prisons or something that you walk through in this 3-D environment pictured below. This is a nice change of pace to the usual overworld top-down perspective, and it looks great. Just make sure you go in with plenty of health, pen and paper, or a walkthrough/guide so you won’t freak out.

The gameplay and leveling is fun and addictive. I didn’t mind the initial mandatory grinding since at the start of the game since even the weakest monsters in the game whoop your ass if you are not careful. But what comes after that is insanity. All the quests are pretty fun, but the game is always making you stop advancing, because you need to grind for forever to be able to afford mandatory items to advance. Just being able to afford equipment is enough, but the farming for money really got out of hand here and serves just as a padding to the game’s length. I understand this, the game being made in 1987 and people wanted a longer game, but this is by far my biggest issue with Phantasy Star and really drags it down. One more thing i felt was needed in the game was more bosses.The few bosses in the game had like a “is that a boss or what?” kind of feel to them, and the battle music didn’t even change. Lassic’s General, a guy that is trying to foil your adventure or some bad guy like that would have made a freat addition to the game. With the dungeons being so long, and with such few bosses, Phantasy  Star’s difficulty in gameplay is more of a marathon rather than a sprint run and if you feel you can’t handle a dungeon, its grinding city for you.

Phantasy Star does not spoon feed you information straight out. You have to talk to eeeveryone, get hints in order to know what to do next. I bet a buttload of people got stuck in the game and just quit because they could not figure out what to do next but it is still very possible to get through the game since the hints you get are not of the cryptic nature like in Simon’s Quest, but in this day and age you might just want to look it up if you get stuck for a long time. I am a grown ass man and i don’t have time to be walking around in circles doing random battle after random battle. Heck i barely even have time to write this review…. Anyway, figuring out what to do in Phantasy Star is a big part of the game and it is very satisfying, the game was never intended to last only 1 week. People were supposed to stuck, since finding Lassic in the first place is a mystery which is a big, cool part of the game. Phantasy Star is not just a linear path you can run through in a few sittings except if you are using a guide. The game has many side-quests for a game of this era. Getting the best equipment in the game or some luxury items that make your life a bit easier and lowering the time you would otherwise use for grinding. This for me is pretty amazing, and really makes the game last This is what makes Phantasy Star a true adventure.

The game looks absolutely gorgeous for its time. The sprites, backgrounds and animations look amazing for an 8-bit game, it was truly second to none when it came to graphics. The game does not have a whole lot of tunes, but all of them are pretty decent. You will get tired of the battle music and dungeon music, sadly Phantasy Star does not reach the lofty heights of the music of Final Fantasy but its pretty decent.

This speedrun can show you how the game plays

Overall, Phantasy Star for the Sega Master System is a great, fun, classic adventure. Grinding and big dungeons might lead to some boredom and frustrations, so you should play it with the manual + pen and paper at least, and maybe you should look into a guide for some stuff if you get stuck. It has aged a bit, and that is to be expected but it is definitely still fun to play if you have some time to put into it since clearing the game takes a while.
Figuring out the mysteries and puzzles in the game is an aspect in video games today that is forgotten and i thought it was really interesting and fun and it made the game feel like a real adventure.
What stands out for me though is how great the game looks for its time. The graphics, the story and the decent OST all make the presentation of Phantasy Star really stand out. Phantasy Star was a masterpiece at the time of its release, a no-brainer 10/10 game and although time has gotten the best of the game in some aspects, it does not mean  that Phantasy Star should not be played today, in fact if you are an rpg fan you might love it.