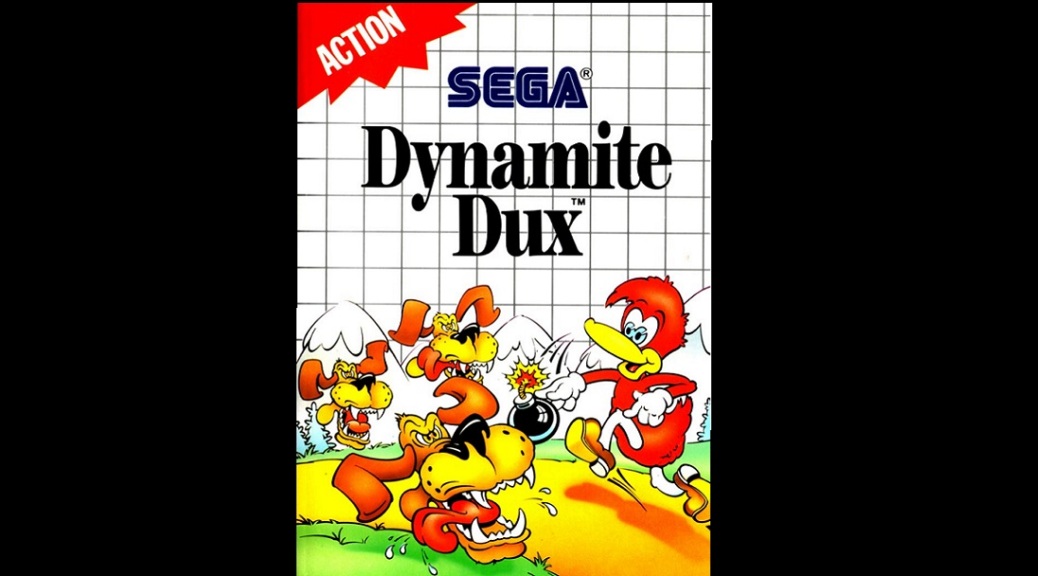 Hello and welcome to another review! This time we take on Dynamite Dux! Why? Well, I am a big fan of the Happy Console Gamer and his YouTube channel and it has become pretty infamous that he really hates this game. As a child he wanted to spend his 90 hard earned Canadian Dollars on something special, something he could immerse in and fall in love with. I think it is safe to say that he didn’t get what he wanted. I love listening to that just as much as any of you but I still felt I had to check out what the fuzz is about. I played Dynamite Dux and I found it to be OK… An OK game with much more potential than the final product actually shows.

The thing about Dynamite Dux is that its a watered down arcade port.  You play as a duck (or 2 ducks in the arcade version) and you are on a quest to save your girlfriend. This is not a 2d sidescroller a la Super Mario Bros but rather play on a field where you can also move up and down like in a beat ’em up sidescroller a la Streets of Rage or the arcade Turtles games.
You can jump, jump kick, hit, hold the hit button in for a charged punch. Other attacks come from weapons you pick up like rocks, rocket launchers and homing missiles. I guess Dynamite Dux is just a beat ’em up with a lots of items and you know what? I found it to be pretty fun.

The controls are great, boss fights are OK until the same bosses start to appear and the attacks you have are pretty fun. The enemies are a bit weird: Sausages, mortar dogs and cats on roller skates… It’s like this game was made for children!
Of course it was… I imagine you would find the Dynamite Dux arcade machines in places like Chucky Cheese or s similar chain (not that I’m American and have any clue). That being said, the game is like 5 stages and it is way too easy. I cleared the game within 30 minutes and I’m sure the Happy Console Gamer did the same. Not the lasting appeal a Phantasy Star fan can be satisfied with.

Still, the thing is that Dynamite Dux is not actually any shorter than for example Castlevania on the NES. The problem is that the game is so easy you clear it in your first go as opposed to most kids were never able to clear Castlevania. I guess its fine for kids to get an easy game like that they can clear but with Dynamite Dux its just way too easy.
Still, the video game world is so fast right now that every once in a while its fun just to coast through a game like this in 30 min and move on. I played Dynamite Dux in between sessions of Resident Evil 7 to calm my soul and it did wonders 😀

The graphics aren’t horrible, maybe just what to expect from the Master System which often outclassed the NES. It’s hard to say with a game like this but I liked the graphics just fine, at least there were no slowdowns or excessive flickering.
The music is fine I guess, pretty childish and nothing you would ever put on your mp3.

Now I totally get the Happy Console Gamer, I disagree with him that the gameplay is horrendous, that the enemies suck and that the music pierces your brain or whatever he said but I think his frustrations lie in the fact that he spent 90$(Canadian) on something that lasted mere 30 minutes. I mean the game is fun and you can play it again but there is little point outside of just that and maybe trying to max you high score. It’s not like he could have done it again and again with different friends since the co-op feature was taken out of the port…. Such a shame…. I’ve been in a similar situation and I’ll definitely talk about that later.

There are a few things that could have made Dynamite Dux a great game: Adding 2 more stages, don’t rehash bosses, raise the difficulty and most importantly make it 2 player. The Master System has games like Double Dragon that are long co-op games so it would certainly have been possible but perhaps very difficult to pull off. I honestly think that Dynamite Dux could have become a great game with all these additions.
The arcade version does some of these things and I challenge the Happy Console Gamer to do a 2 player co-op let’s play of Dynamite Dux the arcade version with Kim or Rob Man! I’m almost, maybe, probably sure he wouldn’t regret it.

Still, what I would have done, and probably what he should have done if he was looking for a fun arcade title was getting Quartet, Double Dragon or Time Soldiers for the Master system. Those are some cool games! But hey, there was bi internet and he was just a kid and I did similar dumb stuff as a kid too (not for 90$ though sheeeesh…..) I feel sorry for kid Johnny….
For me though, I got the game for 6$ and I really enjoyed the 30 minutes I had with Dynamite Dux, and I might even play it again if I need a break from Resident Evil 7 again.