Ever since i started my PC Engine adventure in May last year the Valis series had intrigued me. Being a huge Castlevania/Mega Man fan it was very interesting to see a female, anime styled protagonist jumping around and slashing foes in a skimpy suit of armor.
The games are 4 in total and i would always recommend the Turbografx/PC Engine version of the game. I know its a bit soon but i have kinda already made up my mind about the order in which i like the games which goes like this 3>4>1>2. That being said i might end up not reviewing the others in the same detail but this review should give you an impression on what you should do if you are planning to get into the Valis series.
Valis II and III got released in the US but the other two were unfortunately Japan only.

The story of Valis III revolves around a Japanese girl named Yuko who comes in touch with demons, gods and other otherworldy crap that usually she cannot defeat without using the sword of Valis. A weapon of extreme power that turns even schoolgirls into badasses. By Valis III Yuko is already an experienced, certified badass even without the sword of Valis and she takes on some demon bastards from the demon world who are trying to invade the human world and the god world. You can even see on the Japanese cover that she has matured.

In the first Valis game (chronologically, actually Valis 1 on the PC Engine is a remake made after Valis IV) Yuko is just your normal schoolgirl and you could argue that you should play this game first just to get the feel of the story but to be honest the story isn’t all that interesting. The setting is cool and character design, sprites and cutscenes look really cool but its not anything that will have you take to the streets demanding more lore for the world of Valis.

You jump, you slice with your swords, try to avoid pits and enemies and then there is a boss at the end. Simple yet fun since Valis III manages to do something different with little fun mechanics on its own. You can slide a la Mega Man 3 which can be used to clear gaps without bumping your head and fall into a pit, you are invulnerable while sliding and you do slight damage if you slide into enemies. This sliding element is crucial in boss fights to avoid some of their more brutal attacks and its makes you feel like a badass cause it looks cool and is a great way to dodge an otherwise unavoidable attack.

You get magic and have MP (think sub weapons in Castlevania). That helps a great deal and they work different with each of the three characters.
Yes! there are three playable characters you can switch between at any point in the game (think Dracula’s Curse) and all of them have their strong points that you will want to utilize at the correct moments.
Level design is excellent and enemy placements are challenging but fun in Valis III. The game has extremely difficult sections and some pretty easy ones. That level of difficulty can test your nerves but you start to learn the patterns and get better at the game so when you clear a stage it feels really nice and rewarding like when you finish a stage in Dark Souls or Castlevania. Valis III is the most challenging game of the bunch but the level design is also the best in the series in my opinion. For me high difficulty is good as long as the difficulty is fair and rewards your skills and fast reaction.

The game looks great. It has nice looking backgrounds and fine sprites. I thought Valis II was lackluster in that department but Valis III sets the standard for the games that followed who all look good.

The music in Valis III is pretty cool. It has some of that epic fantasy 80s charm that will have you wanting to hack some demons but it is not even close in quality compared to Mega Man and Castlevania franchises since we are already mentioning those games. The series as a whole though has pretty good music and it has the CD quality going for it but all the games suffer from bad sound effects. The sound effects just do not match what is going on like when you take a hit it sounds like a football referee blowing his whistle for a free kick. It just makes no sense and i really wish they would have put in some more effort since they have all the CD space to make quality sound effects.

Overall the series is a very fun bunch of action-platformer games for us who cannot get enough of games like Castlevania and Mega Man. Valis III comes out on top as the best game in the series but maybe you should play the Valis 1 remake first to get a good introduction to the series. Valis 1 is pretty good and so is Valis IV but Valis II feels like the most unpolished game of the four.
You can find Valis games on other platforms but the Turbografx/PC Engine versions are always the way to go, no contest.
Its too bad that the series didn’t turn into a bigger franchise… When it was dying some guys decided to use the rights of the game to make softcore erotic/porn game. Yeahhh… classy move boneheads… 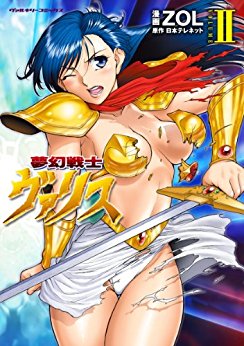 Thanks for reading and do not forget to like us on FB!